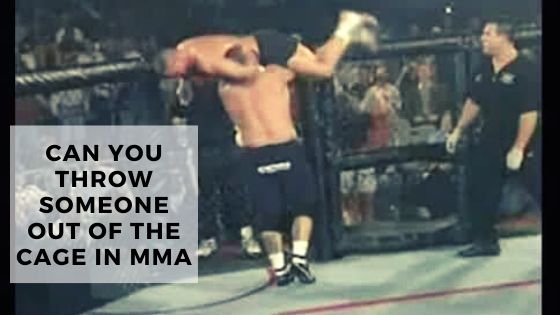 Back in the day, MMA was one of the most brutal sports out there. Fighters were putting their lives on the line, but they did not get the attention of the fans.

At that time there weren’t a lot of rules in MMA. A couple of decades ago MMA got an official set of rules. This rebranded the sport, and since then MMA has come a long way.

In fact, throwing someone out of the cage has been attempted before. This way back in 1996. During a fight in the UFC between Tank Abbott and Cal Worsham, Tank Abbott tried to dump Cal Worsham over the cage, when Worsham was in a position to lock in a standing Guillotine.

During the time this happened, MMA was not as big as it is now. Unlike today, there weren’t a lot of rules in the sport back then, fighters weren’t even wearing gloves.

It was pretty much like Bare Knuckle Fight Club. In that match, if Tank Abbott did throw Cal Worsham out of the ring, it would have been completely legal.

Since then a lot has changed. The unified MMA rules were implemented, and it is practiced by many MMA promotions including the UFC.

So, you cannot throw someone out of the cage anymore. The cage height has also been increased slightly, which makes throwing your opponent much harder.

What Happens When You Are Caught Doing An Illegal Move?

The way MMA promotions deal with illegal moves such as this differs according to the fighter’s intention.

The referee can either deduct a point or even disqualify a fighter if the fighter uses an illegal move intentionally.

Disqualifying a fighter often happens when the victim cannot continue anymore due to the illegal move.

This was recently seen when Aljamain Sterling won via disqualification when the referee deemed that Peter Yan intentionally hit him with an illegal knee strike.

In case of an unintentional illegal move that made the opponent no longer able to continue, the scorecards will tell the tale.

This is the same concept of judging a fighter who throws or tries to throw the opponent out of the cage.

What Supplements Do MMA Fighters Take After A Weight Cut?