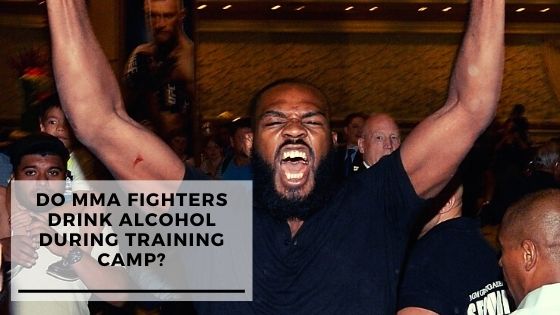 We have seen a lot of MMA fighters who are associated with alcohol in the past few years. While some are known to have drinking problems, some just enjoy a couple of sips once in a while. Then some fighters strictly avoid alcohol.

But the fighters who drink alcohol, do they change their habits during fight camp? Is it okay to drink heading into a fight?

Most MMA fighters avoid booze during fight camp. Almost all of them refrain from getting completely drunk. Though some do pop a bottle open occasionally, just to celebrate a successful day of training.

Conor McGregor mentioned that during UFC 246 fight camp, he stayed miles away from alcohol.

He said he hasn’t consumed any alcohol for well over 2 months. He further admitted that this was due to the lesson that he learned heading into the Nurmagemedov fight, in which he used to drink frequently, and that eventually led to a disorganized fight camp.

Jon Jones is also known to be a party freak even during fight week. he did it during all his career and still managed to be the GOAT of his division.

His extreme partying got him into trouble on several occasions outside the cage but it never affected his performance inside the cage.

At the beginning of his career, he hid it from the public, but after a while and especially after his troubles it became public and he didn’t shy away from it.

This obviously shouldn’t be taken as an example for young fighters, Jon Jones is a once-in-a-lifetime specimen, he is extremely talented and few people could have the success he had in MMA with the same lifestyle.

How can alcohol affect a fighter closing in on a fight?

Alcohol is known to drain your endurance. You might have noticed after having a drink you need to urinate frequently. This dehydrates your body.

When your body is dehydrated, muscles aren’t fed enough oxygen. This will cause you to get fatigued prematurely.

To completely recover from a night of drinking it’ll take up to 2 to 3 days. So drinking 2 or 3 days before a fight is not a good idea.

Alcohol can also affect your strength, there are 2 reasons for this:

You will be able to notice the exact degree of the effects if you go to the gym hungover.

Is it okay to drink moderately during fight camp?

As long as you have control and maintain your consumption to one or two glasses max, you could get some benefits from alcohol.

Alcohol can help you relax after a hard day of training which will support recovery. When used sparingly it has a handful of health benefits as well.

The bottom line is most MMA fighters stay away from alcohol during fight camp, even fighters who love their booze refrain from consuming it.

But as long as you have control, an occasional couple of glasses of alcohol during training camp is alright. But during fight week, it is best to avoid drinking completely.

What is the UFC Belt made out of?