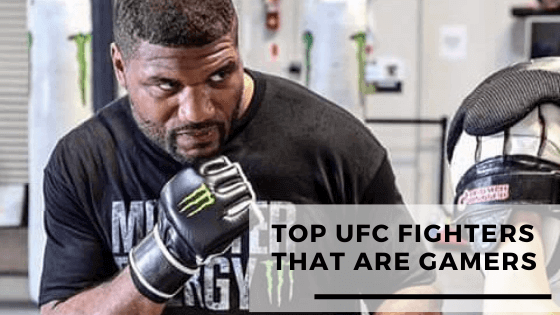 The life of a mixed martial artist doesn’t just revolve around punching heavy bags, running a lot of miles daily, constantly getting beat up in training camps and fights, or going through gruesome weight cuts.

In fact, gaming is a major aspect in the lives of some of the top UFC fighters.

Over the years, top UFC fighters like Rampage Jackson, Anderson Silva and Demetrious Johnson have been known for their love for games and gaming.

And it’s easy to see why; not only does it act as a distraction from the pressure and thoughts of fights and training.

It also aids their hand-eye coordination, and their ability to make critical decisions in real fight situations.

So today we’re going to be taking a look at some of the current top UFC fighters that are avid gamers.

When you hear a person joke about 60% of their total earnings going to league of legends, then you know that they are serious gamers.

In a podcast with Celebrity GamerZ on YouTube, the former middleweight champ talked about how his love for games developed and grew since he was a child, and listed the likes of Final Fantasy, Fallout, Skyrim and Rimworld as his favourite games.

Widely regarded as one of the best fighters of all time, he is known for spending endless hours gaming, even at the expense of sparring or training.

Although to him, this isn’t much of a problem as he has claimed to have learned new striking techniques from the UFC’s video game.

Some of his favourite and go-to games are; Apex legends, Fortnite, the aforementioned UFC game, and warzone.

Britain’s next best hope for a UFC champion, Molly “meatball” McCann is no stranger to gaming.

She has previously appeared on Toffee TV, an Everton fan channel on YouTube where she played FIFA, and has also used her Twitter platform to post about her gaming sessions.

The UFC’s third-best fighter of the year 2020 is one of the most avid gamers in the entire UFC roster.

In a mini-tour of his house with celebrity gamerZ, he showed off his gaming setup and talked about his love for games since he was a child.

He mentioned Assassin’s Creed and Call of Duty: Warzone as his all-time favorite games.

Last on our list is the current UFC middleweight champion, and arguably one of the best strikers to have ever crossed the octagon.

He has credited his love for gaming for a lot of his success and improving his striking arsenal, in a similar way to Max Holloway.

He claims that gaming has helped his hand-eye coordination, as well as his ability to remain calm and readapt to difficult situations.

He has cited the last of us, and COD cold war, as two of his favorite games.