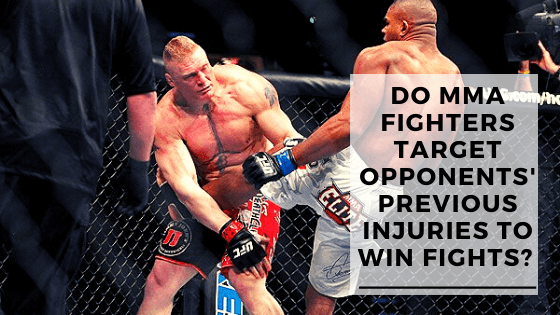 Some MMA fighters have claimed to specifically target opponents’ previous injuries to get ahead in a fight. Your initial reaction might be to say: ‘That’s crazy, how could they do that?’.

But think about it, fighters don’t get in the cage unless they agree to, and they have to be cleared by a doctor first.

Countless fights have been postponed due to injuries sustained in training camp. That’s why all the big promotions have backup fighters who can step in, just in case.

If the doctors give the green light, and fighters have agreed to step in the octagon, then it’s ‘go time’. It’s just part of the game.

A couple of months before their clash in UFC 182, Daniel Cormier publicly stated that he fully expected Jon Jones to target his injured knee.

Cormier had damaged ligaments but decided not to get surgery. He even said that he would be ‘disappointed’ if Jones didn’t target his knee using his famous oblique kick.

A quick follow-up to this was that, in turn, DC would also be targetting Jones’ toe.

Famously, Bones had broken his toe during his fight against Chael Sonnen, way back in UFC 159.

But what about longevity?

Not everyone thinks like this, though. Other fighters think about longevity.

They don’t want to be the one that causes one of their fellow fighters a massive injury that would prevent them to keep fighting.

Roxanne Modafferi, who recently retired, always stated that she actively tried to avoid targetting injuries because she had no desire to cause lasting damage when it could be avoided.

This doesn’t mean that fighters won’t constantly look for openings. If a fighter’s hurt and they’re protecting themselves in a particular area of their face/body more than others it’s part of the game plan to use that to your advantage, even if you don’t specifically target the injured area.

It’s hard to say, but maybe more fighters would agree with Jones and DC than they would with Modafferi.

Back in 2011, during UFC 141, Alistair Overeem famously targetted Brock Lesnar’s stomach, kneeing him constantly, and finally dropping him with a body kick.

Lesnar had had a huge part of his colon removed seven months before the fight.

Amanda Nunes chopped Raquel Pennington’s leg during all five rounds of their bantamweight bout at UFC 224, in May 2018.

The fight had been postponed due to an injury Pennington had sustained. Her leg had been crushed in a car accident and took months to recover.

Nunes won in Round 5 via KO/TKO, in no small part thanks to 21 significant leg strikes landed.

Aldo almost immediately started to target the injured area, kicking the shoulder three times in a row. The fight was called by the ref soon after and Aldo won by TKO.