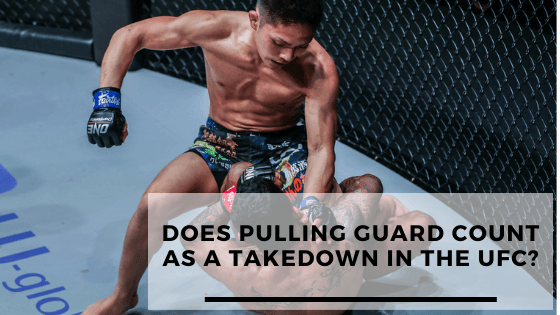 According to The Unified Rules Of Mixed Martial Arts, a judge must award points to a fighter when he or she cleanly takes down their opponent.

The judge has to consider it ‘effective grappling’.

While pulling guard is not explicitly stated in the rules as a takedown, if the judge views it as effective grappling then it should be considered a takedown.

The rules here are open to interpretation, so it is up to the judge in any scenario to determine whether pulling guard will count as effective grappling/award points for a takedown.

If a fighter is at a distinct weight disadvantage or they have been unable to take down their opponent, then guard pulling may be a necessity.

Pulling guard offers the fighter an opportunity to bring the fight to the mat without a conventional takedown.

Pulling guard essentially offers an alternative route to a takedown for fighters who have not been able to grapple their opponent successfully.

The main pro here is essentially giving a fighter an additional takedown method when others have failed.

Using this method, a fighter will find himself in a less advantageous position than if he had completed a standard takedown.

With a traditional takedown, a fighter is almost guaranteed a point, while with guard pulling the judge can decide for themselves whether the pull will be considered a takedown.

In the worst-case scenario, the judge may even rule in favor of the fighter being pulled rather than the one who initiated the takedown.

Furthermore, this style of takedown forces the instigator onto their back with their opponent on top of them, making defense more difficult and the likelihood of the instigator being grappled higher.

Simply put, pulling guard can open a fighter up to a less than ideal situation for both offense and defense.