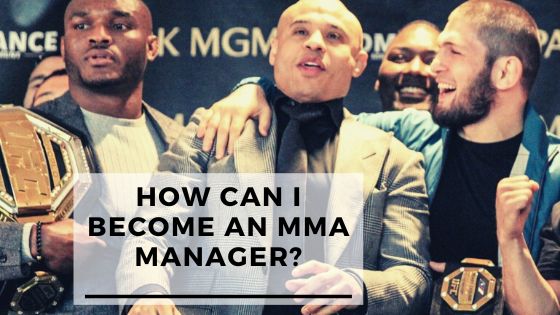 Start with getting the right backround

Firstly, to become an MMA manager, you need to have the right background. A majority of MMA managers you would speak to have come from a particular type of background.

There are several routes to MMA management. You would need to:

• be a fighter, then a trainer

• be a manager of sports stars in other events

• be a promoter for other sports

Majorly, you need to have some sort of mixed martial arts training and likely have some amateur fights yourself.

The reason for this is the obvious need to meet upcoming fighters in need of management and since the business of MMA management requires you to have connections with fighters, coaches, and promoters, you need to be already familiar with the MMA world.

Also important is the fact that most MMA managers start with a couple of fighters from gyms they train at. You need to be a familiar face at the gym yourself and have a good gym relationship.

What if I have none of the above, what should I do then?

With none of this, it is hard to figure out where to start.

Maybe join an event promotion company; manage a couple of bands; learn about MMA somehow; get a job with an MMA management or a promotion firm; get a job in a sports management organization – all these things can give you a start.

You are talking about something normally done by people with a couple of decades of background, or the children of managers who have grown up in that environment.

In becoming a good MMA manager, you should have it at the back of your mind that it takes a lot of commitment and passion.

How do MMA managers make money?

Firstly, it is important to note that there isn’t much money to be made until fighters get to the highest levels.

Managers make money through sponsorships and take a percentage of the fighter’s purse. Usually, it goes between 10% and 20%. Managers even charge 30% sometimes!

How much do MMA managers make?

However, since the majority of MMA managers are not going to start with championship-level fighters, it is important to talk about prospect-level management.

Assuming one is a manager of a prospect level fighter who earns about $4,000 early on over the course of four fights, and $1,500 from ticket sales and $8,000 from various sponsors per year, such manager under a 20% contract would be making about $2,700 per year.

Who are the best MMA managers I can learn from?

There are several mistakes that can be made in MMA management, especially when starting off. Some top managers you can learn from include: