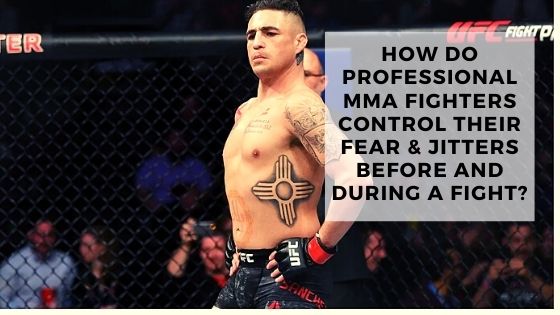 The fight-or-flight (or freeze) response, also known as the acute stress response is a physiological reaction that occurs in response to a perceived harmful event, attack, or threat to one’s survival.

For the average person, the fight-or-flight response can occur under a wide variety of circumstances ranging from actual real danger to facing a generally unpleasant, but not necessarily life-threatening situation.

For an MMA fighter, the fight-or-flight situation can be described as one in which a fighter perceives himself to be in danger of immediate or impending harm or pain.

These acute stress response situations may occur before or during a fight, and the different physiological reactions that a fighter may experience include:

Now many of these reactions usually occur before a fight, much more than during, and professional fighters are constantly trying to overcome that aspect of the game.

Do professional fighters get Jitters too?

A lot of MMA fighters have been upfront and open about experiencing pre-fight nerves and emotions that put their wills to step into the ring, cage, or canvas to the test.

Undisputed UFC Welterweight champion Kamaru Usman gives a most accurate description of what this feels like. He shared that oftentimes before fights he felt slow, and like he needed to urinate multiple times, despite not having drunk much water.

Former UFC Women’s Bantamweight champion Holly Holm has admitted that she’s often petrified moments before she gets into the cage, even going as far as questioning why she was putting herself through all that pain and hardships.

Many other professional fighters have reported experiencing similar struggles before fights.

In this reluctance to go through with an activity that could potentially cause them a lot of physical and psychological harm, MMA fighters undergo physiological reactions that lead to them having a flight response – that is, they start to feel like maybe they don’t want to fight after all!

UFC greats such as Donald “Cowboy” Cerrone and George St. Pierre have intimated about having dealt with intense pre-fight jitters, with the latter sharing that he gets so nervous before fights that he throws up before each one!

Professional fighters could also experience flight responses during fights, where they feel like they don’t want to be on the receiving end of any more punishment and then proceed to flee.

A good example of this is the UFC 116 heavyweight clash between then-champion Brock Lesnar and hard-hitting challenger Shane Carwin.

In the very first round of the fight after getting a taste of Carwin’s famed punching power, Lesnar spent close to half the round running away from his opponent, turtling up and barely surviving the round.

In many cases such as this, the fight would’ve been stopped by the referee to save the fighter from taking further punishment or having to resort to running away as Lesnar did.

But more often than not, the acute stress response that MMA fighters experience during fights is one of fight rather than flight.

UFC veteran Ernest Chavez answered in a forum on the topic that the flight response for fighters comes everywhere else except in the ring or octagon. Fighters might be jittery in training camps, during fight week, weigh-ins, walkouts, but never in the cage.

Chavez’s answer has been reiterated by many other professional fighters. Everything changes once you’re standing across from your opponent and the instructions from the referee, your coaches, and the fans in attendance, are for you to fight.

In a rush of adrenaline (one of the hormones secreted by the body in response to a fight-or-flight situation), fighters may experience:

In many cases fighters also experience tunnel vision and hearing loss, which explains why sometimes they just blackout and start swinging away, ignoring every technical advice that comes from their corners because they truly cannot hear any of it.

What is the best mindset to have for an MMA fight?

It is impossible for a human being to completely get rid of the fight-or-flight response. It is an evolutionary trait that cannot just be discarded or honed out. But professional MMA fighters have developed some strategies that help them to put these responses under control.

The whole point of fight-or-flight responses is that the body reacts to what it perceives to be harmful or dangerous.

Professional fighters have learned to approach fights differently, and professionally. Mixed martial arts is not just some street brawl or altercation.

Rather it is a sport with rules and regulations, and approaching it that way will take away some of the threat that the mind and body associate with it.

It is perhaps a clichéd saying that you fear that which you don’t understand, but it is a valid saying nonetheless. Understanding and being aware of what your body is experiencing and why it is experiencing those things during a fight-or-flight situation will help you deal with it better.

The only way to become truly comfortable and in control (to some degree) of your responses to a fight-or-flight situation is through experience and visualization.

Constant exposure to real fight scenarios can help fighters develop instincts that help them maintain a level of calmness when faced with these situations.

When the inevitable physiological reactions start to kick in, it is only through that which has been so repeatedly practiced that it becomes second nature, that fighters can keep their heads, and remain professional.

This is something Israel Adesanya reportedly utilized before his title fight against Robert Whittaker. Israel shared that he had gone through the fight many times over in his head, so much so that everything that happened in the cage seemed like déjà vu to him.

He had seen it all before and hence wasn’t surprised or fazed by anything. Israel scored a resounding victory over Whittaker that night.

That’s the power of visualization.