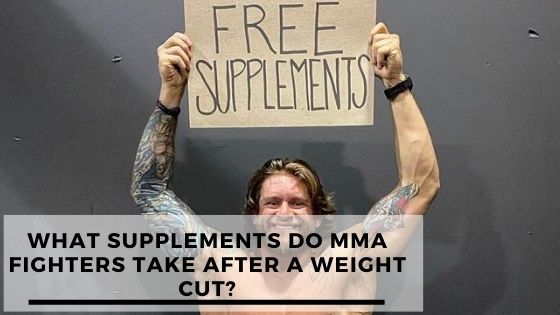 Have you ever noticed how different MMA fighters look during their weigh-in and just 24 hours later for their fight in the cage?

It’s all down to weight cutting practices by the fighters, who want to compete in a lower weight class than their own.

Weight cutting gives them an advantage over an opponent who fights in their natural weight class.

This question then arises: how to correctly cut weight and regain strength for a higher chance of winning?

Most techniques are used to lose weight quickly before a weigh-in and gain a significant amount of it back before the match target the fluid portion of our body.

As the human body is mostly water, drinking less fluids and losing it through sweaty exercises, hot baths, and sitting in a dry sauna contribute to a significant weight reduction.

The thing to consider now is that everything in the human body is maintained within narrow ranges for optimum performance of vital systems, called homeostasis.

The fluid levels are balanced against nutrients and electrolytes in the cells and blood, and any fluctuation in their levels could have severe consequences.

Therefore it is necessary to take into consideration the body limits during weight cuts.

In the days leading up to the weigh-in, the fighter is shedding off pounds through the above techniques, losing 1kg of body weight for every 1-liter fluid lost either through urination or sweating.

Carbs are reduced to 50g per day, as they help the body retain water, as does salt, leaving the food practically bland.

To make up for their energy during training, high protein and fat foods are preferred, such as eggs, white meat, and vegetables.

If the athlete follows a good weight cut plan, they do not need to take additional measures such as diuretic supplements or natural laxatives, to pull their weight further low.

The process does not end after getting through the weigh-in, rather the equally important part of regaining the fluids, strength, and weight has to be managed in only 24-36 hours before locking hands in the ring.

The safest way to regain fluids, nutrients, electrolytes, and energy sources in the body is to take small meals periodically.

Water intake should be around a liter every hour as the body cannot absorb more, supplemented with sugar or protein powder as this helps water retention.

Sodium intake can also be increased moderately for the same reason.

As carbs were restricted, the fighter should focus on getting as many carbs, proteins, and fat as possible to get their blood sugar levels back up again.

Following a weight-cut plan properly allows a fighter to lose and gain as much as 15-20 pounds between weigh-in and the fight.

This gives the heavier fighter an advantage over their opponent and may eventually be the deciding factor leading to a win!