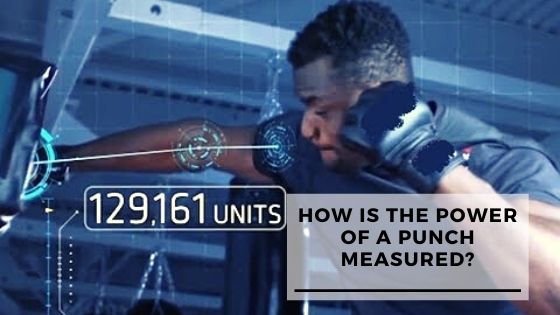 Punch power is an important aspect in MMA as well as boxing, it gives us a rough idea of how the match could play. In boxing, punching power could essentially decide the outcome.

Professional athletes can punch much harder than the average man. But how exactly is punch-power measured?

You might have seen a machine that measures the power of a punch in arcades. But is this machine accurate?

This machine is not as accurate as most people think. It gives a rough estimation and it mostly depends on the speed.

When the bag hits a sensor in the top of the console, the impulse is registered, this in return calculates the punching power.

The value displayed is not on point, there are similar machines. Some of these are much more accurate and used in some promotions to measure the power of a fighter’s punch.

Another approach taken to measure the power of a punch is using calculations. The process that is used is much more accurate. The process is much harder and requires a small team to work on a punch.

How to Measure your Punching power?

If you want to measure your own punching power there is a way that you can do it with some simple calculations.

This is the basic principle behind measuring power. You can measure your weight and multiply it by 0.0345. This will give you a rough idea of how much your arm weighs.

Now you have to punch a heavy bag while one person measures the time and another is beside you with a velocimeter.

Apply the data received by this into a calculation and you will get the force of your punch in Newtons.

This is the same physics that is applied when measuring the punch of a professional fighter. Unlike a homemade setup, they use much more accurate methods to collect the data. Therefore the results would be far more accurate.

There is another way used to measure the power of a punch. This is by punching a heavy bag and analyzing the distance that it moved.

This will allow you to measure the energy transfer. By dividing that by the time taken for the punch, the power can be determined. This is also a common method that is used to measure power under laboratory conditions.

Who has the most powerful punchin MMA?

The most powerful punch that is recorded belongs to UFC Heavyweight Champion, Francis Ngannou. He measured a punch of 129,161 units (which is the unit used to measure the power of a punch)

This is equivalent to 96 horsepower. According to UFC president Dana White, this is equal to a Ford Escape coming at you at top speed or a sledgehammer swung at full speed.