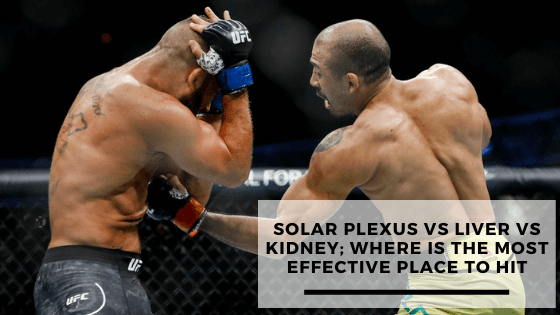 In our previous article, we talked about and analyzed hits to some of the most significant parts of the human head; the jaw, the temple, the nose, and the eyes.

Well, today we’ll be going further down the body and analyzing punches to the stomach.

While a lot of fighters, whether professional or otherwise tend to headhunt a lot, we have seen from experience in combat sports that perfectly placed body shots can prove to be even more fatal.

For the sake of emphasis, we’ll be examining hits to just 3 vital parts; The solar plexus, the kidney, and the liver, and how effective they can be in a fight, we shall be taking a look at the technical and scientific analysis, as well as drawing up information from the real world.

So, let’s get right into it.

The Solar plexus, otherwise known as the Celiac plexus is a network of nerves that is located in the upper part of the abdomen, and just underneath the diaphragm.

It is known as a network of nerves because it controls aspects of the liver, the spleen, the stomach, the pancreas, and even the kidneys.

This just shows how delicate and important the Celiac plexus is.

You might have heard this popular sentence in combat sports before; “getting the wind knocked out of you”, well that’s exactly what a hit to the Solar plexus can cause.

So given the fact that the solar plexus lies just around the diaphragm, getting hit there will cause the diaphragm to spasm, thereby affecting the way the lungs carry air in and out.

So in reality, when you’re struck in the Solar plexus with enough force, that energy is transferred to the diaphragm, which in turn affects the ability of the lungs to work properly, thereby leading to the “wind getting knocked out of you”.

In addition to this, the pain that accompanies such a strike, this pain is a result of the numerous nerves that exist within the solar plexus.

For a practical example of how painful a hit to the Solar plexus can be, take a look at Anderson Silva’s knee to Stephan Bonnar which completely knocked the wind out of him and ended the fight.

The liver is the largest internal organ in Human physiology at approximately 5 pounds.

It is situated primarily in the upper right-hand segment of the abdominal cavity, beneath the diaphragm, and right on top of the stomach, right kidney, and intestines.

The liver is responsible for a raft of functions, including the making of bile, producing proteins for blood plasma, regulating blood levels and blood clotting, etc.

With so many functions, it is easy to understand how important the liver is, and how fatal a clear hit to the liver can be.

Many people believe that a liver shot is the most painful shot anyone can take.

I mean, when you see athletes like Donald Ceronne comfortably take headshots, but get knocked down by one liver shot, you begin to wonder.

According to a 2013 study on blunt liver injuries, if a healthy adult male were to take a direct hit to the liver at a minimum speed of 5 metres/s, it could cause liver injury.

Putting this into perspective, the average adult male can hit at 6 metres/s, while professional combat athletes are capable of hitting at twice that speed.

This shows how fatal it can be.

Now the reason why a liver shot hurts so much stems from the functions of the liver, it acts as a filter for body toxins as well as being directly responsible for blood circulation, so getting hit there causes it to release large and unusual amounts of toxins and blood which causes the body to hibernate.

Also, remember that the liver is located around the diaphragm, which will also impact breathing.

A popular example is the Alistair Overeem and Brock Lesnar match-up at UFC 141 where a left kick to the liver of Lesnar caused his body to shut down completely.

The kidneys are two bean-shaped organs located on either side of the Intestinal cavity in the retroperitoneum.

The primary functions of the kidney are to filter blood, remove wastes, control the body’s fluid balance, and keep the right levels of electrolytes.

Now you should know that it can be easy to confuse the right kidney with that of the liver, this is because they’re on the same side.

Over the years, there has been some debate on the legality and illegality of kidney strikes, this is because of how dangerous they can be.

While kidney injuries are rare in combat sports, they are extremely fatal, they can even lead to the person urinating blood.

Now that we’ve talked about strikes to each of the above body parts, we can now make an informed decision on which is most painful and effective in a fight.

While getting hit in each of the above places can restrict airflow and breathing, none is capable of causing the amount of pain a liver shot can cause.

A kidney shot will lend itself towards more long-term damage, but a liver shot will simply send anyone to the ground, no matter how tough that person is, as long as he/she is human, no one can withstand an accurate strike to the liver.