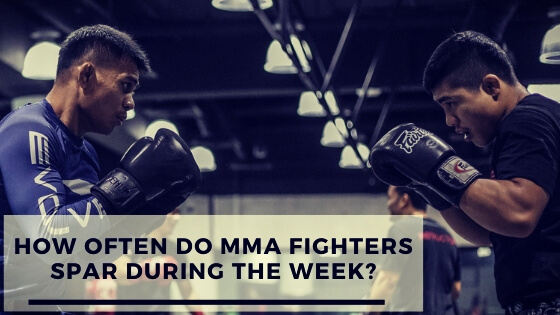 Sparring has been a long-debated topic within the MMA community.

Some view it as an essential part of fight preparation while others see it as a potential risk to injuries.

So let’s take a look at how often MMA fighters spar during the week.

Firstly, there are different approaches that MMA fighters use and that may depend on fighting philosophies and preparation.

Here are the main factors considered when sparring.

Full-contact sparring is sparring with an opponent at a fight level.

This is where you fight while applying the same amount of force as you would in an official MMA fight.

In a striking contest, this means punching/kicking your sparring partner with full power.

In grappling such as in Jiu-Jitsu, this may apply takedowns, holds, clinches, and submission chokes.

Full-contact sparring is widely encouraged for grappling disciplines as there is no striking involved, which reduces the risk of injury.

However, full contact sparring in striking disciplines such as karate, muay thai, boxing, and kickboxing have received much criticism within the MMA community for various reasons.

Fighters are operating at full speed, but there is minimal power involved.

For example, a kickboxer may throw his kicks at the same speed but he limits the power of his kicks and punches.

The purpose of this is to train striking techniques and subconscious responses that a fighter should have.

This may be learning how to execute low-kicks or counter takedowns.

Light contact hasn’t escaped criticism as some MMA practitioners think that it doesn’t adequately prepare a fighter for combat.

Year-round training is when MMA fighters train without an upcoming fight. In this phase, fighters try to learn new techniques and develop many areas of their game.

For example, a UFC fighter known for his striking abilities may focus on learning Brazilian Jiu-Jitsu.

Sparring mostly happens within this phase.

Fighters try to implement these techniques in light and full-contact training.

Fight camp training is usually 4-8 weeks leading up to a fight.

The purpose of fighting camps is to prepare for a specific fight.

Fighters usually work on combinations and techniques that they’ll use in the fight.

Full-contact sparring happens in the early and mid-phases of the training camp.

It may happen on a weekly basis to condition the body for the physicality of the fight.

Light-contact sparring happens in the last two weeks leading up the fight.

The fighter should be adequately prepared by this stage.

Full-contact sparring is highly discouraged at this point as it may lead to unnecessary injuries that may jeopardize the fight.

So How Do Top MMA Fighters Approach Sparring?

Most MMA fighters such as Conor Mcgregor and George St-Pierre don’t believe in full-contact sparring before fights.

They try to limit full-contact sparring as much as possible as they feel it may lead to injuries.

There are a few fighters that share an opposite view such as Alistair Overeem.

He is a big advocate for full-contact sparring.

For him, there is no substitute for real-fight experience and he encourages it as a primary method of training.

Sparring is a fundamental aspect of MMA training.

The type and amount of sparring are individual-specific, so fighters should consider many factors when planning to spar.

However, it is best advised to spar as much as you can in the healthiest way possible.

Conor McGregor’s coach John Kavanagh said it best: ‘we spar to upload the software without having to damage the hardware’.