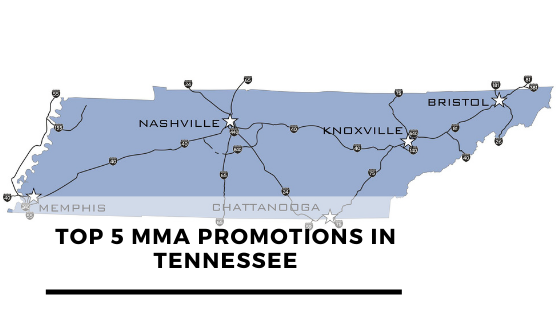 You can’t talk about mixed martial arts in Tennessee without mentioning Valor Fights.

Valor is one of the biggest promotions in the region, with 86 events under its belt.

They have more than 500 fighters on their roster and have seen former champions go on to fight with names like Invicta, Bellator, and UFC.

For live event tickets, go to their website at vfcmma.com.

Links to live streams of their events are available from the VFC Facebook page.

They hold live events at the Meadowview Convention Center. You can live stream their events with spectationsports.com.

You can purchase live event tickets on the official Showcase MMA website.

Aries Fight Series is a young organization, but that doesn’t mean they don’t draw a crowd.

They hold events at the Camp Jordan Arena in East Ridge, Tennessee, and have held five events since their inception.

They have an amateur, professional, and youth league.

Aries Fight Series has over 1,750 followers on Facebook. You can watch live streams at specationsports.com.

You can also check out their YouTube channel for fight videos.

This promotion operates out of Dickson, Tennessee.

They have a home gym that offers a variety of lessons for the public, ranging from MMA, boxing, wrestling, and fitness classes.

They offer self-defense courses for law enforcement officials or groups.

They also have a youth program called After School Martial Arts.

They have held 17 live events, including several every year which are promoted as “family-friendly.”

5. All or Nothing Fights

All or Nothing Fights is the new kid on the block.

They operate out of Daisy, Tennessee, and hold live events at the Soddy Daisy Wrestling Arena.

Their first event was held on January 29th, 2022. It’s worth mentioning that All or Nothing Fights was founded by Billy Swanson, a pro-fighter who has competed in Bellator, AFC, and Valor.

All or Nothing Fights has over 1,100 Facebook followers, which is not bad for a promotion with only one live event on the books.

Tickets are available through their Facebook page. Drop by their YouTube channel to catch more fight action.

Which promotion is your favorite?

They are well known and established, holding some first-class live fight events you don’t want to miss.

It appears combat sports are growing rapidly in the southeastern region, and several newer organizations are looking to make their mark.

You can purchase tickets to live events held by the majority of these promotions at Fightertix.com.