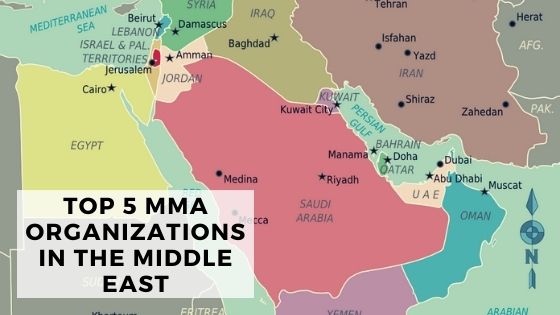 With the popularity of the sport reaching new heights every single day, the Middle East has also caught up to this rising phenomenon.

More and more promotions are surfacing rapidly, and we are seeing some extraordinary talent come out of that region. A few well-known fighters from the region are Mohammed Fakhreddine, Jarrah Al-Silawi, and Ahmed Amir to name a few.

The promotion has a roster consisting of fighters from over 20 countries.

This Bahranian promotion started back in 2016. Events have been held in many nations including, Mexico, Brazil, India, Kazakhstan, England, and many more.

Brave CF has been growing steadily since 2016.

MMA is a popular sport in UAE. Even the UFC regularly organizes events in UFC Fight Island which is in Dubai. As the name suggests the UAE-based promotion of UAE Warriors is the premier promotion in the country.

The promotion has been around since 2012 and has held 29 events under their banner. During their early years, they’ve had events in Malaysia, Thailand, and Brazil.

This is a recently introduced promotion to the Middle East which is based in Egypt. The promotion started in 2019.

2020 was a dull year for the company as they couldn’t schedule any events. But they’ve made a comeback with 5 events in 2021.

Evolution Championship is another big player in Middle Eastern MMA. The promotion is based in Egypt. It is a bit older than Brave FC.

Evolution Championship hosted its first event in Cairo, Egypt on the 27th of March 2015. Since then the promotion has had 49 events.

The promotion stayed within its boundaries and hasn’t held any event out of Egypt to date.

No, this is not a branch of UFC. Arabic UFC is also known as Arabic Ultimate Fighting Championship is also based in Egypt. This is a much older promotion than the earlier 2 as it started in 2013. But it hasn’t seen the same level of success.