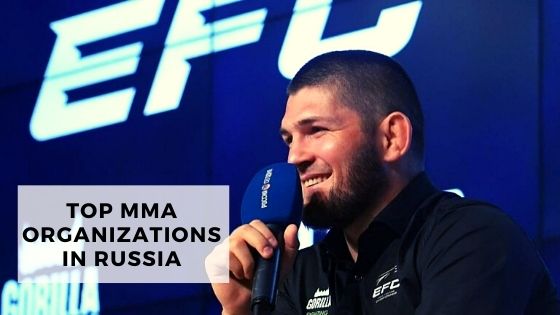 Formerly known as Absolute Championship Berkut, it was founded in Grozny, Russia in 2014 by Mairbek Khasiev.

The Russian promotion is regarded as one of the best in the world providing a perfect blend of sambo, kickboxing and Brazilian Jiu Jitsu.

Absolute championship Berkut was the inaugural name of the promotion, and Mairbek Khasiev who was born in Chechnya founded the promotion on the premise that it would be the chance for young aspiring combat sport athletes to make it at the highest level in MMA .

Several high-profile fighters have emerged from the promotion like Musa Khamanaev, Aslambek Saidov and Belsan Isaev to mention a few.

The promotion also engages in fighter exchanges with other promotions.

AMC Fight Night is widely regarded as one of the best organizations in the business.

Fight nights as they were called then were usually operated under MMA and K-1 rules which made for an entertaining watch.

The promotion would hold several fight nights and live events, but the true buzz hit when a Greek kickboxer by the name of Mike Zambidis had a controversial match against Batu Khasikov, the match was labeled a fluke as it was rumored that he had cheated in the match after a TKO win against his opponent while also dislocating his opponenets jaw in the process, causing the promoters to reschedule the match.

Eagle fighting championship is a Russian promotion owned by the undefeated Khabib Numagomedov, it was established in 2020.

Some people still question the promotions’ ability to stand out and become bigger, but with the undefeated champion in their corner the EFC team can rest assured they’re in good hands.

M -1 Global is a Russian Mixed martial arts promotion based in St Petersburg, it was founded by Vadim Finkelchtein in 1997.

The promotion engaged solely in co-promotion until 28th August, 2009 where it held the first ever M-1 Global breakthrough event at Memorial Hall in Kansas City.

After the breakout the promotion has signed with other promotions and organizations around the sport to co-promote, but the most interesting development came when they signed with the UFC in 2018 and became a Russian scout for talent to be recruited for the UFC.