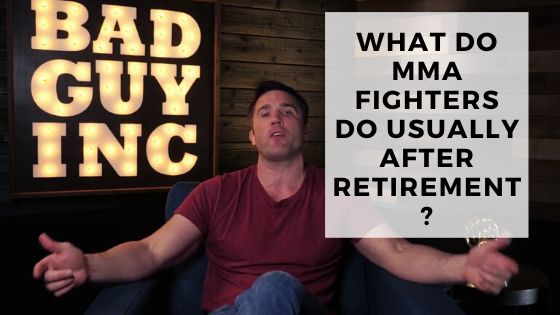 MMA is still a growing sport, it doesn’t have the same revenue that sports like basketball, football, or boxing can bring.

This means that the fighters who sacrifice their mind and bodies for the sport receive relatively small payments. Unless you are a fighter who headlines PPVs, chances are the money that you make in the UFC will not be enough to set you for life.

Considering that UFC is the biggest promotion in the sport, if you are from a different promotion, the wage that you get will barely cover a few years of retirement.

As many fighters before have mentioned, MMA takes a toll on your body. Almost all the fighters who enter MMA, leave with some degree of brain damage. With a beaten and battered body, medical bills easily add up.

MMA fighters are yet to receive a pension or medical cover after they leave an organization. So, they need to find another job that can pay their bills.

1. Staying relevant in the sport

After practicing MMA all your life tuning into something new when you retire is not easy. Especially when you have spent your prime years in MMA. Due to this, a lot of fighters decide to stay in the field that they have trained in all their lives.

One way a fighter can stay relevant is by staying with their organization. Some fighters grace the TV screen as commentators.

Some examples would be Daniel Cormier and Micheal Bisping. Then there are some who work backstage for a paycheck.

Another common path that fighters take after leaving MMA is to open their own gym. What better way to put all the training that you took and the experience you gained, and use it to get a paycheck. This is the most common way a fighter retires.

Or if you are like Khabib Nurmagamedov, you can start your gym and start your own MMA promotion as well.

2. Getting a day job

Unless you make a name for yourself in MMA, life after retirement is not going to be easy. Many MMA fighters retire without making a name for themselves.

If you are not among the two categories above, chances are you make it big in the entertainment industry. Popular fighters can easily make it into professional wrestling.

We saw that with Ronda Rousey signing with the WWE.

Brock Lesner, went back to WWE after his run in the UFC. Even Jorge Masvidal appeared a few times in AEW.

Or there is a place in Hollywood if you do not break your face. Gina Carano, Randy Couture, and GSP are some fighters who made it to Hollywood.

Can a Powerlifter Be a Good MMA Fighter?

Does the UFC have its NFTs? How To Buy?