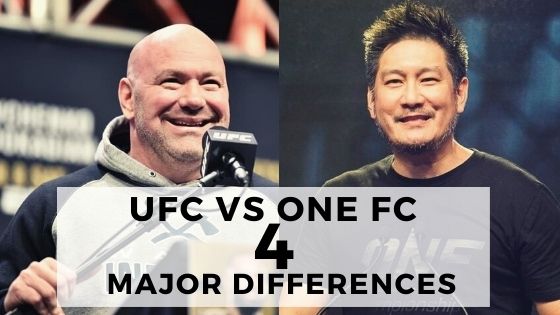 The Ultimate Fighting Championship (UFC) and ONE Championship are undoubtedly two of the biggest promotions in the world of mixed martial arts right now.

While the UFC has been a household name in MMA for close to two decades now – even maintaining a sort of monopoly over the entire market for an extended period, ONE Championship’s emergence as a real player in the promotions game has occurred much more recently, coming over the last couple of years.

Fundamentally both promotions offer the same thing, high-quality organized mixed martial arts entertainment for the fans of the sport.

Whatever differences that exist in the fighting and weight cutting rules, judging criteria, number of weight classes, and the overall presentation of fighting events, are influenced by the history of these promotions and their various strategies for attaining higher viewership numbers.

In this article, we will be discussing the major differences between the UFC and ONE Championship and how some of these subtle distinctions, and other more unique ones, were adopted.

1. Event Presentation and Approach to MMA

The UFC’s position as the number one MMA promotion in the (western) world is as a result of what it adds to its events, and how this giant corporation approaches MMA.

The UFC embodies all that could bring real excitement to fights, trash-talking, fighter beef, grudge matches and well-orchestrated event promo videos are all features of the UFC.

And these help to add additional drama and tension to fights, which in turn gets the fans even more invested.

ONE Championship, on the other hand, approaches MMA like you would expect an eastern corporation to, treating it as more of an art and a tradition, than a violence-fueled exhibition.

The tagline which can be found on the body’s official website states that they are “a celebration of Asia’s greatest cultural treasure and its deep-rooted Asian values of integrity, humility, honor, respect, courage, discipline and compassion.”

The UFC’s tagline which just simply says “as real as it gets.” makes it fairly apparent that these corporations are not about the same things.

It’s no surprise that perhaps the most well-known UFC export in recent years, Conor McGregor is a perfect representation of what the UFC promotes and that ONE Championship has no such personalities on its fighter roster.

While the rules on what fighters can and cannot do are pretty much the same across many fighting bodies in the world, there are a few moves that are acceptable in ONE Championship and are not in the UFC.

The type of strikes that are banned on both sides include:

But unlike in the UFC, fighters in ONE Championship can throw knees at a grounded opponent.

So the knee strike that Petr Yan landed on Aljamain Sterling which handed the latter the UFC Bantamweight title by disqualification would have stood in ONE.

Matt Hume, a referee and chief official at ONE FC, argues that this adds excitement to fights because the fighter on the bottom cannot just turtle up and take a quick breather – the fighter would have to actively defend himself.

Inactivity is also more frowned upon in ONE Championship than in the UFC.

Referees can issue yellow cards to fighters who stall or fail to initiate any offensive attacks, and for repeated illegal strikes. Two yellow cards will end up being a disqualification for the fighter.

The UFC currently has more weight classes than ONE. Fighters on the UFC roster compete across 12 weight divisions, four of which are female weight classes.

ONE Championship only has eight weight divisions at the moment, with four of those divisions being for female fighters.

ONE also has an atomweight (115lbs) class that is not available in the UFC or any other big promotion.

The weigh-in rules are also different in the two promotions.

UFC fighters have been known to go through extreme weight-cutting measures that leave them dehydrated during fight weeks. A few rules have been put in place to counteract this, but they don’t stop the excessive weight-cutting practices in the UFC.

In ONE Championship, a unique “walking weight” system was introduced. It involves checking fighters’ weights every day during fight week and administering hydration tests which the fighters must pass.

Judges in the UFC use the 10-point boxing scoring system to carry out decisions on the winner of a fight.

The following criteria are used by each judge when scoring the fight round by round:

A lot of judges’ decisions in the UFC have come under scrutiny in recent years, and calls have been made for a new judging system to be used.

What ONE Championship does differently starts right off the basis of the judging system as fights are not judged round by round. Instead, the judges make use of five criteria to determine the winner of the fight as a whole.

These are the major differences between the UFC and ONE Championship. However, the number of weight classes in ONE is certain to increase as more fighters get added to the promotion’s roster.

Does ONE Championship Pay Fighters Better Than UFC?