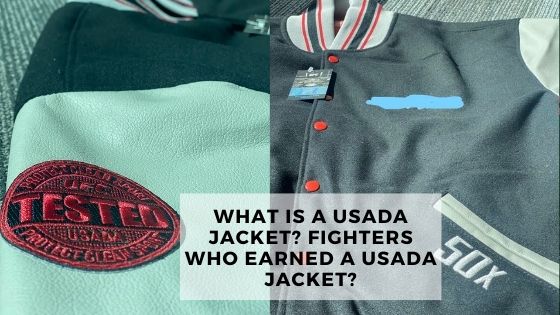 What is a USADA Jacket? Who are the fighters who have earned a USADA jacket?

What is a USADA jacket? This is a jacket that is given to a fighter who has had 50 clean tests.

The jacket is not the prettiest, but it symbolizes something greater. It proves that a fighter is completely free of any drugs.

You might think that earning a USADA jacket is not that hard. Especially when in 2021 TJ Dillashaw had 25 drug tests and Paulo Costa had 23.

In reality, there aren’t a lot of fighters who can boast about owning a USADA jacket.

Fighters who look substantially large for their weight class or have gained or lost weight rapidly are accused of using PEDs.

Congrats to @Usman84kg on a 5️⃣0️⃣x perfect test history under the USADA program, and becoming the first UFC athlete to reach that mark fighting his/her entire UFC career under the program. pic.twitter.com/ViDYIECMPA

This often results in repeated testings by USADA. A perfect example of this would be TJ Dillashaw. For 145 pound fighters, he looked much larger than his peers in his weight class.

He was also larger than a few lightweights as well. With doubts setting in and accusations thrown at a fighter, the number of tests increases.

With that being said, there are some UFC legends who own the USADA jacket, among them is:

Ultimately, UFC could do better with the jacket. It definitely can use some visual upgrades.

Does USADA test UFC fighters all year round?

The United States Anti Doping Agency (USADA) is in charge of making sure that fighters aren’t taking any performance enhancement drugs.

Thus USADA tests fighters repeatedly all year round and not only in the days leading up to a fight?

The UFC has a partnership with USADA when it comes to testing their fighters. This bond between USADA has been there since 2015.

In 2021 alone USADA tested almost 750 fighters in MMA. They did over 4250 tests in one single year. It is safe to say that USADA is experienced in its craft.

USADA often checks fighters for drugs even if they are not leading up to a fight. This is to make sure that all fighters are clean.

Doping is a big issue in the sport of MMA. Even though some might disagree with the rules regarding doping, in the UFC it is strictly banned.

The same concept is followed by almost every elite promotion in the sport. There are a few less-known organizations that weren’t strict with their fighters using PEDs. But in today’s MMA the fighters aren’t allowed to use drugs.

What Is The Difference Between USADA and WADA?

How Can I Join ONE Championship As A Fighter?

Top 10 UFC Fighters Who Have Their Own MMA Promotions